This is Apocalypse Naths work in progress interviewing Irvine Welsh.

I had been slightly stuck with how to make the interviews seem as though the guest was truly living the aftermath of an apocalypse and thought of making a computerised voice call the guest.

Unfortunately I left the interview to the last minute of  Irvine’s last day in Barcelona, so his schedule was pretty tight therefore we were reduced to an hour and a half with no time to prepare or rehearse. The outcome of my new idea is a little bit like listening to Spike Milligan being a Darlek (https://www.youtube.com/watch?v=2QxNJEBr_l0 )

Although I am well aware of sounding like a bit of a plonker, I cried with laughter at my absurd voice and I hope others will have a bit of giggle at my expense!!.

I know I start off sounding like a automated machine and then I slowly slip into my normal voice, so I don’t need to be told. Just imagine that the robot sometimes becomes human however returns to it’s normal programmed robotic voice under rules and regulations.  Excuses excuses… But just remember I am not being paid so I’m entitled artistic license. If you want to give me an opinion pay me a wage. Or simply don’t listen.

I would also like to mention that as most of you know the idea of this show came from the 70 year old BBC Radio program Desert Island Discs and as I don’t want the internet to block the interview due to un paid copyright to the musicians. I have decided not to upload the music Irvine chose however you can open up another internet window and pause Irvine’s interview and listen to his music choice.

Here are the You Tube links to Irvine’s music choice:

MARVIN GAYE  – I heard It Through The Grapevine

SEX PISTOLS – Anarchy in the UK

What a wonderful way to begin the year:

Just before Xmas my good friend Alex Nightingale sent me an email saying that his friend Irvine Welsh was coming to Barcelona for the month of January to do some research and I would be the perfect person to help him. So Alex introduced Irvine and I via email and Irvine told me that he would be coming to research the characters and elaborate the idea he had for a pilot for a TV series about Spanish Independence.

Good to meet you!

Alex has mentioned a few of these details – he also said you spoke Spanish and Catalan.

I’m going to be working with Amazon’s new Spanish language TV drama operation which sets up in January, and Buccaneer Media in London, who are currently working on a TV adaptation of one of my novels. They asked if I had ideas for a Spanish language show.

I was involved in the Scottish indy referendum of 2014, and from there I got interested in the Catalan issue. I pitched the idea of a drama to them, focusing on a family divided by the status quo v independence debate. So I’m going to be in Barcelona in January to research the show, hopefully come up with some ideas and an outline for a series and a draft pilot script.

I’ve a vague notion that the central character is a woman who is pro indy but from a traditional family, who’s brother is a cop in Madrid and is called back to Barcelona to assist in the election disruption. It’s inspired by a Scottish woman I met who came from a strong Orange loyalist family in Glasgow and was estranged from them by her pro indy views. But nothing set in stone – I’m starting up the very beginning and basically need to talk to people about this, and would love to chat with you.

If you were around in January and had some free time it would be great to get your take on this, and if you know anybody from either side of the debate who has strong views, it would be great to talk to them too. I’m probably going to be staying at Alex’s place – though he’s likely to be off globetrotting most of the time I’m around.

All the best, Irvine

My friend Alex had asked me to give Irvine the keys to his flat like I have done on numerous occasions with other friends of Alex’s as he lives round the corner from my flat.

I thought that the easiest way to meet someone was to greet them at the airport. You break the ice in the confined space of a car. Or as my mother says, you scare the hell out of them!!

We hit it off straight away, Irvine is such a kindhearted, easy, smily, chatty, charming man. Great company to be with.

Poor man the day of his arrival I texted him telling him that I was at the airport with a blue beret, as I knew what he looked like, but he didn’t know what I looked like.

I had looked Irvine up on you tube before answering his email to see if I could understand him, as I often have a hard time understanding some Scots, but Irvine I understand perfectly, as he says himself, living in America for 8 or 9 years he has had to make himself understood. Anyway getting back to Irvines’ arrival at the airport after texting him that I was there with a blue beret, I was actually in the wrong terminal, so he had to wait for me to drive round to collect him. That’s when I was shocked to see that he was really tall and thin cause on the video he had appeared short and stocky.

I have had the most amazing time going around Barcelona and it’s suburbs with Irvine, trying to imagine where the characters of his series would come from, where they would hang out. What I found most admirable about him is his capacity of self discipline. His dedication to his work by designating 2 possibly 3 months of sobrierty, developing ideas and writing. Which is what he’s been doing every January and February, (March!) for the last few years. Having someone like that around is a very positive energy that rubs off.

Yesterday at 7 am Irvine and I went around Barcelona’s working port with the Dockers showing us around and giving us the run down on 3 months the Spanish Policia Nacional and Guardia Civil were accommodated on 2 tourist ferries to try and ban the Catalan referendum and later to implement the article 155.

The Barcelona Dockers were extremely generous with their time. They took us round the port and gave us an inside view on the situation. 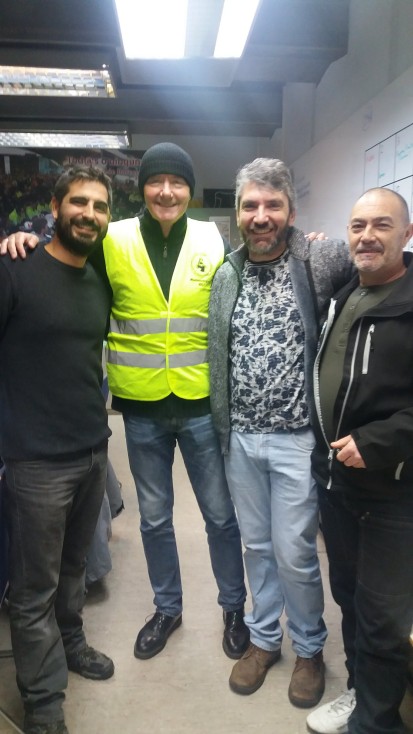 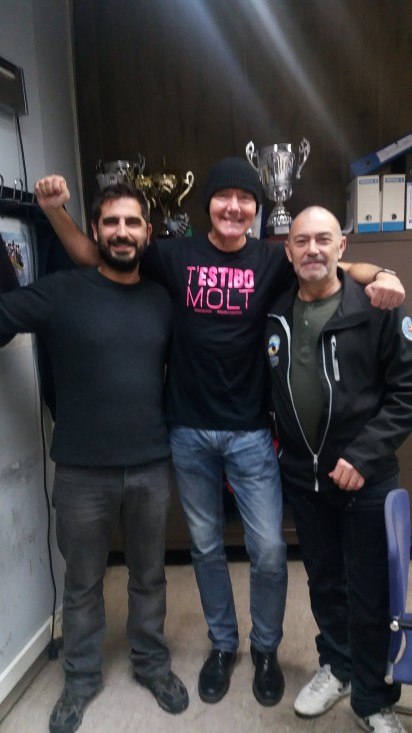